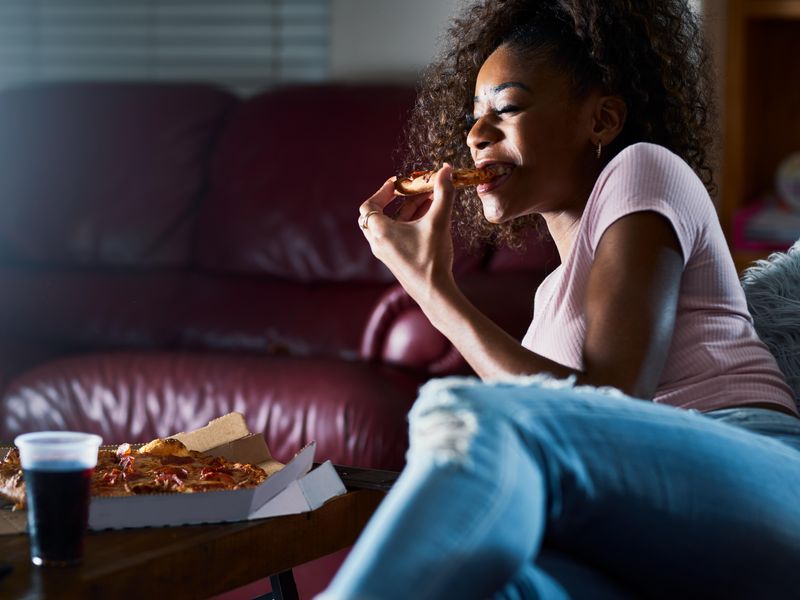 THURSDAY, Oct. 6, 2022 -- Your fondness for midnight snacks has caused you to pack on the pounds over the years, and now researchers have a better understanding of why.

While late-night eating has long been linked with an increased risk for obesity, researchers weren't sure exactly how it caused weight gain until now.

"When meals are delayed by four hours and everything else stays the same, you burn fewer calories, have an increased drive for food, and experience changes in fat tissue that would promote weight gain," said study author Frank Scheer. He's the director of the Medical Chronobiology Program at Brigham and Women's Hospital in Boston and a professor at Harvard Medical School.

The solution? Eat earlier in the day, he said.

"The new data suggest, together with the literature, eating earlier in the waking day results in changes in physiology that would promote weight loss and limit weight gain," Scheer said.

For the study, 16 people who were overweight or obese stuck to a strict early and late meal schedule for one day each in a lab. In the weeks before each experiment, folks maintained fixed sleep schedules. They also ate identical diets and stuck to the same meal times at home.

The participants reported on their hunger and appetite, provided blood samples throughout the day, and had their body temperature and calorie use measured. Researchers also collected samples of fat tissue.

In addition to feeling hungrier, burning fewer calories, and showing changes in fat tissue, eating later also affected the hunger and appetite-regulating hormones, leptin and ghrelin. Ghrelin is the "go" hormone that tells you when to eat, and leptin is the hormone that tells you to stop. Leptin dropped by 16% when folks ate four hours later, the study showed.

Due to the study's design, researchers were able to tightly control for exercise, sleep and light exposure, which could affect how many calories participants burned.

More research is needed to see if these findings hold in real life, Scheer said.

"In the real world, when people change meal times, they may also change other behaviors such as timing or quality or time of sleep or how much they exercise, which could affect weight," he said.

The study was published Oct. 4 in the journal Cell Metabolism.

Dr. Louis Aronne, director of the Comprehensive Weight Control Center at Weill Cornell Medicine and New York-Presbyterian in New York City, reviewed the findings. When you eat matters to weight control, he said.

"Eating all calories early in the day has been shown to reduce weight," Aronne said. "This study … demonstrates that eating the same number of calories late rather than early can trigger mechanisms that lead to weight gain.”

Many people who eat late have little or nothing for breakfast, he noted. "You may not be hungry in the morning because you eat so much at bedtime," Aronne said.

His advice? “Try to shift your eating to early in the day by [eating] a bigger breakfast and lunch to reduce appetite at night."

Marion Nestle, a retired professor of nutrition, food studies and public health at New York University, said eating earlier is not necessarily a panacea for weight loss, but it could be helpful for some people.

"This study suggests that eating late at night changes the metabolism of people who are overweight in ways that make it more difficult for them to lose weight," said Nestle, who also reviewed the study findings.

"Most research on the question of meal timing says it doesn't really matter, [but] what does matter is the total amount eaten in relation to caloric expenditure," she said. "People who are trying to lose weight need to figure out how to do that in ways that work for them, [and] not eating late at night is worth a try."

The Academy of Nutrition and Dietetics offers healthy ways to lose weight.